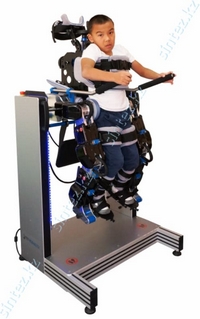 Ideal reflection of the movement of a healthy man!

It is intended for rehabilitation of the lower limbs in patients with walking dysfunction.

“ROBACTIV” increases the effectiveness of walking training. The device provides stimulation of the child's gait for individual segments of the lower limb with the definition of gait parameters. Allows precise execution of gait cycles maximally close to the anatomical.

“ROBACTIV” allows stimulating of 6 joints of the lower limbs.

The possibility of performing the following exercises on “ROBACTIV”:

Mobile orthoses with variable length, equipped with a variety of adjustable leg holders, allowing adapting to the size of patients in a wide range. The devices can be used by people with a body weight of not more than 50 kg, height of not less than 110 cm and not more than 150 cm (dimensions are determined by the length of the patient's limb). “ROBACTIV” is equipped with a node that allows you to take a sitting position on the device, which is designed to facilitate the placement and fixation of the patient, and then its verticalisation (exercises are carried out in a standing position). Thanks to the soft restart function, “ROBACTIV” can be used for exercise in patients with spasticity. It also has the ability to accurately determine the bending angles of the limbs, which allows persons with fixed contractures safely and effectively use the advantages of the device.

Intuitive robot control is possible due to the easy-to-use desktop and on-screen menu. Commands, operating parameters, and messages that do not require interpretation are displayed on an 8-inch screen. The operator of the device has a large selection of programmed exercises with a smoothly adjustable level of intensity, adapted to the capabilities of the patient.

Set of the locomotor system:
1)  Device Robactiv
2)  Lifting device.
3) Software with a computer and a monitor for visualization of exercise.